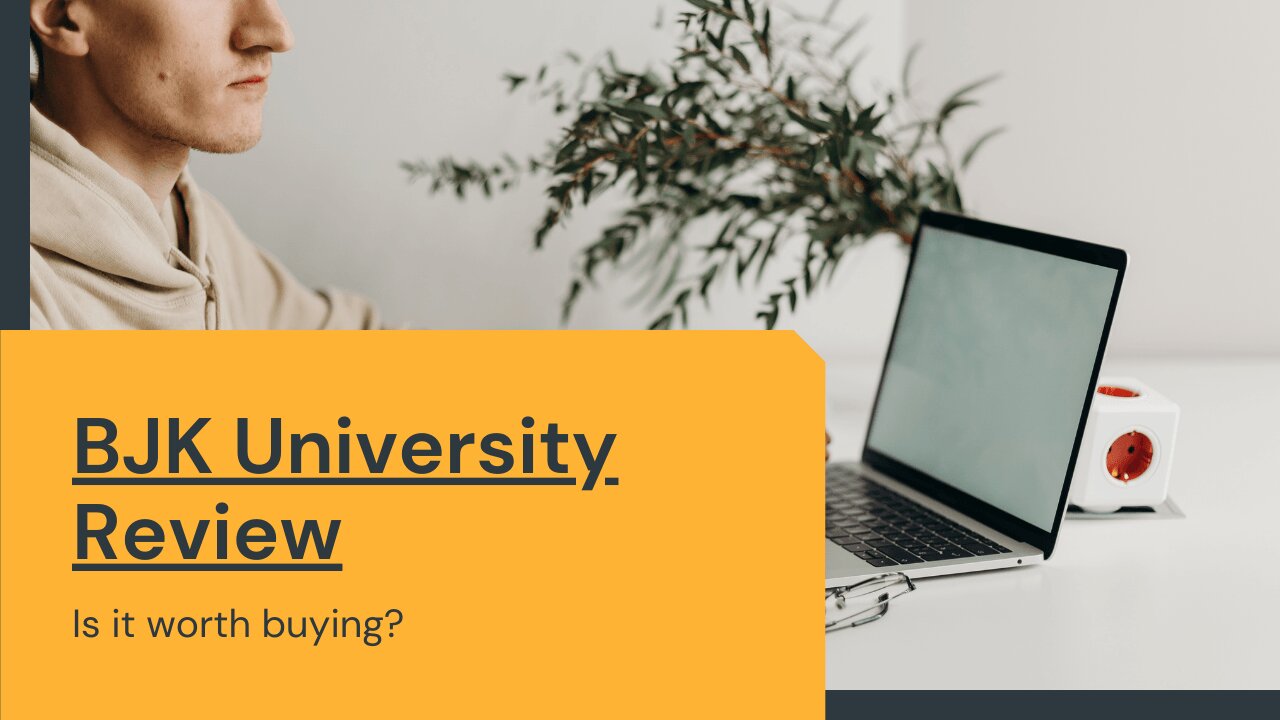 If you use Instagram, chances are you’ve come across BJK University and are wondering if they can help you succeed financially. In this BJK university review, we will answer this question and a few others including;

What Is BJK University?

BJK University is a program that claims it will teach you how to create a digital business that leverages Amazon’s FBA model. If you are new to online selling, BJK University is the program to enroll in, according to the website.

The program’s creator recommends it as the finest for individuals looking for a beginner’s course. On the website, you’ll be greeted by a 3-minute video pitching the FBA model.

To be honest, you might not be persuaded since what you see a lot is the founder showing off his wealth. He doesn’t go into detail about what BJK University has to offer.

Bashar is a native of Iraq who migrated to the United States. Across all of his social networks, he has amassed millions of fans. His private page has well over a million active followers, while BJK University’s Instagram account boasts hundreds of thousands.

He apparently earns seven figures per year using Amazon FBA, which involves buying items at a low cost and selling them at a large profit.

What Does The Course Offer?

After registering, you will have access to the training materials, the program’s support group, coaches to answer questions, and much more. The course is designed to teach how to identify products that you can offer on amazon for a higher price. The course will also show you how you can spend as little time as possible researching the best products to sell, and much more time marketing them on Amazon.

The entire process can be automated, which is another thing the course teaches. You can make 7-figure sales without having to lift a finger. Which is hypey and highly unlikely. Nothing online is 100% automated.

Bashar claims he has a secrete formula that has worked for him since he joined Amazon FBA. He says that it’s best start off by rolling out many different products so that you know which gives the best profit. This is what he calls the A/B testing process. The more products you have, the higher the odds, better stability and you can easily scale up your business.

On the face of it, it does make sense. It’s the same concept that FBA advertising uses to determine which product brings in the most profit. However, the program’s goal is not to have you rely on a single profitable product; they would rather you earn a few thousand dollars each month from several unique products.

Can You Make Money With BJK University?

There’s no doubt that you can make money with the course. You can actually use what they teach at BJK University to set up an Amazon FBA venture with Aaron Chen, however, the issue here is that Amazon FBA itself is an extremely difficult business model to success with. It has a lot of moving parts, is expensive to set up and is extremely competitive.

We can guarantee you that more than 90 percent of the people who buy into the course won’t make any money.

That’s too much money to invest in a program that has such a low success rate in my opinion.

Plus, they only offer a 3 day refund policy. I suppose that’s better than no refund at all, but 3 days is pretty darn short.

What Are Its Pros And Cons?

Is BJK University Worth It?

I honestly feel there are better Amazon FBA courses out there.

And don’t get me wrong, you can potentially make millions from Amazon FBA, and you can build the business from anywhere. But, of the many ways to earn an income online, this is probably the most difficult, cumbersome and expensive to start.

It’s decent, if you have the money to pay for this course and everything else that goes along with it, and are able to find a profitable product, but we feel affiliate marketing is way easier and better.

The reason it does not work for some people is that you have to buy the products to sell and keep them stocked at all times. This is expensive to do for the average person.

You need at least $10,000 upfront capital to start and there is no guarantee that the business will work. In addition, Amazon charges high fees just to let you list your products on their website.

They also take about 15 percent of what you make to cater for warehousing and product delivery to customers. This eats into your margins, and easily discourages from continuing the business.

So it’s a business model for people that have deep pockets and plenty of time to spare.

Is BJK University Real Or A Scam?

The course is legit, and you can potentially make money if you have the resources to get you started. But there is a lot that can make it difficult for you to succeed.

For instance, you may not have time or the resources to go beyond the course.

Once you are ready to start, you need to buy a ton or products well a head of time so that they can be shipped to customers when they buy from you.

Figure out the branding and paid ads and work with low margins to make little profit.

Also (and this is just my opinion), Bashar seems even better at promoting the course than improving what’s being taught in the course itself. He’s all over Instagram.

BJK University has potential, but it’s not for everyone.

Amazon FBA requires you to set aside a lot of your time, and put in a lot of work and money to get products rolling. The margins are discouraging for most people which makes it difficult to get into profit. Profit is EVERYTHING when it comes to business.

I feel there are better and easier ways to earn income online, such as affiliate marketing. If you still choose to go ahead with this course, think about it critically – the course itself and Amazon FBA in general.

Weigh your options, and decide whether you have the resources and the patience to see things through, and are prepared for a bad outcome. I do feel that if you are to start a business online, it’s important to take into consideration a few things…

There is one business model that beats Amazon FBA in ALL of these areas.